The water temperature is the mean temperature of the seawater under normal conditions, at a situation in which cables are installed, or are to be installed.

In the ocean, the depth and strength of the thermocline vary from season to season and year to year. It is semi-permanent in the tropics, variable in temperate regions (often deepest during the summer), and shallow to nonexistent in the polar regions, where the water column is cold from the surface to the bottom.

The sample equation is an example of a thermocline below the epipelagic zone and therefore only valid for depths about >200 m. The equation was taken from the paper 'Correction of Single Log-Derived Temperatures in the Danish Central Graben, North Sea' by Douglas W. Waples, 2004 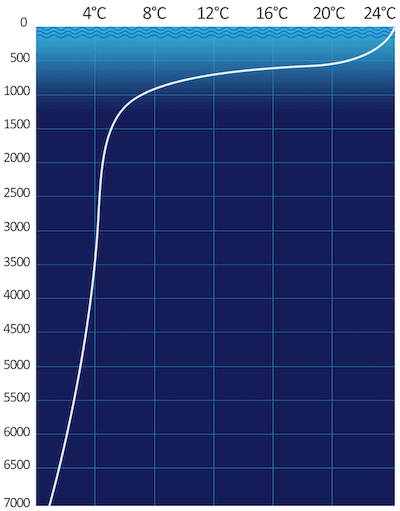